Had a bit of a late night by accident last night, so after a very late morning I hooked up with a guy called Bülent from work. We went for lunch at a Pizza place that he reckons was the McDonalds of the pizza world - it was more like Pizza express (in decor and quality) and tasted as good - but cost a lot less money!

Also had a wonder through Dortmund picked up some bits including a proper skype headset on what turned out to be a very sunny day; 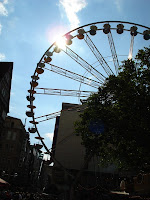 Making some plans for a bit of travelling - I think I'm going to check out some German cities. Not sure where I'm starting yet, but next weekend I'm thinking of going to Köln (Cologne). Also it looks like Berlin is on the cards (its quite a trek though, I think its further than Paris - so Bülent is going with me and we are staying at his folks house). It's also been suggested that Amsterdam is only 250 km away (its closer than Berlin) so I might go there too.