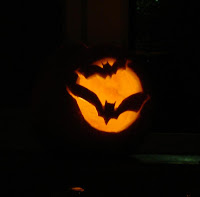 Okay, so I'm not doing fancy dress this year, or a party, so I decided to do a pumpkin instead... 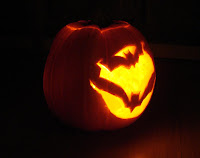 You have no idea how difficult it is trying to take pictures in the dark!
Posted by Matt Rowley at 8:59 PM No comments:

No, I'm not actually Disturbed, it was just a band I went to see on Friday www.disturbed1.com

Although suprised at how good they sound live (the album style they have does not normally lend itself well to a live performance) and thinking it was a great gig, it had a very strange start and end time... I arrived at 7:45 and they were already playing... then finally they were throwing plectrums and drum sticks into the crowd by 9:20 and we were out the door by 9:30.

This isn't actually anything to do with the band, but the curfew that the Carling Academy has on it, all the same it was still a great night, and of course got to rock with Del and Christy (see the picture - I thought that she was just trying to be metal by showing the metal horns \m/ !, but I think she just wanted to show off her ring some more :-)

Posted by Matt Rowley at 3:48 PM No comments: