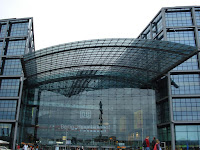 Now, Berlin was quite an experience. To start with, I wasn't in my normal place of work - I was on the Trading floor in Essen on Friday 08/08/08. I met up with Bülent who I was going with, we then went on to Bochum and stopped off in a Cafe there, before getting on the train to Berlin.

This particular train was not exactly amazing, and to make things worse there was no food on it! We were ready to pass out by the time we hit Berlin. 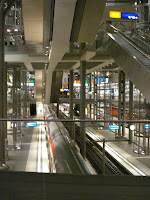 Now first of all, my first experience of Berlin was the train station. Now many of you must be thinking, who cares about a train Station? Well you haven't been here - this place is massive and quite unbelieveable (see the cool pics).

From the train we were picked up by one of Bülent's good friends and straight to it. 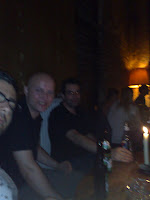 We hit some cool bars and as a pleasant suprise this is a massive mix of culture, this photo was taken in a bar that was full of arty types (some trying to hard, but most were just cool). 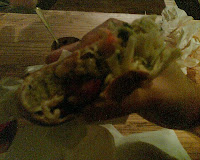 As well as many bars on this evening, I also got to try my first falafel (traditional German food :-) 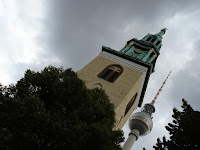 Due to a very long day I opted for an early night (in at 2am - Bulent carried on and turned up at 7am). I got going on Saturday and left Bulent to sleep off the excess of the night before.

On my travels, I really was taken off guard by the mix of architecture in Berlin, all of which seemed to mix with no effort. 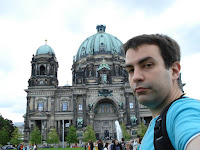 Going from the tradtional.... don't I look hansome eh? (I really did feel like a tourist!) 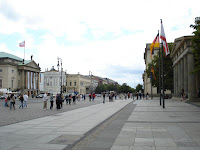 And, the sheer vast array of history... 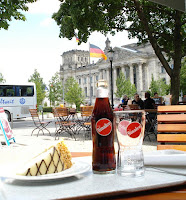 To the parliment building (Complete with cake :-). This building has a clear dome (I am later told by Bülent that this is to give a symbol of transparency). 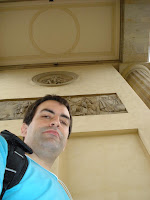 And I decided to go for the Brandenburg Gate from a slightly different angle... 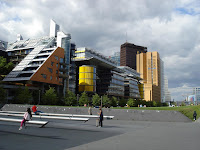 Just to give a bit of a view the other sort of architecture, here is ome of the newer stuff.... Including PWC and some luxury flats (and seesaw). 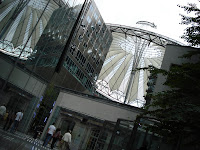 Now this is a strange area, with the sony centre and a huge Cinima (that we saw Kung fu panda at on Sunday - very good film, worth a watch). 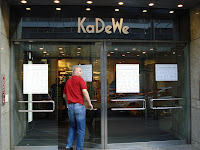 This is probably more interesting for the ladies than anyone else... but the biggest shop in Europe. I kid you not, this place is massive (had to stop myself before going into a Douglas Adams description of infinity).... but look... 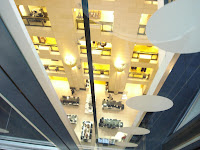 ... the view from the glass elevator doors at the top! 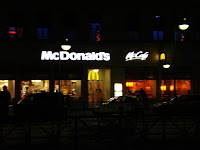 Along with all that culture, I also thought this was quite amusing. Now this picture does depict the McDonalds that we all know and loath... but I just liked that fact that it has a brothel situated directly above this (note I do not know this from personal experience) 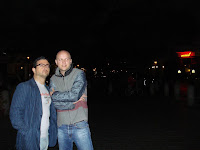 The place with the red neon in the background we actually has brunch at the next day - Vegitarian and everything! 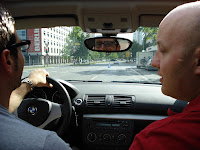 I would also like to thank Dogu for driving us about this weekend, cheers! 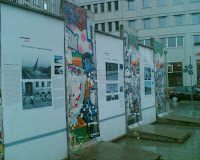 ... and almost forgotten about, apparently there used to be this wall thing going through Berlin... you really wouldn't know now. 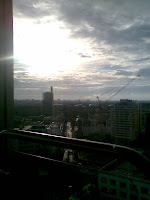 Also, before we left for home (after Kung fu Panda), we went to one of the coolest bars I have ever been to. It is very, very high, you would have no chance of finding it unless you knew where it was (I really did wonder where Iwas being taken). But it is cool and has views accross the whole of Berlin - amazing!

Before travelling back to Berlin we had some time to kill so after a Burger King at the train station (classy eh?) we have a wonder around. I find myself in a store selling magazines and see a Q magazine in German with Metallica on the front cover. I automatically start swearing as it's in frikin German. Until Bülent pointed out it was an English edition (cheers Bulent). Due to the slight Embarrasment I failed to realise the cost of this mag - nearly 13 euros, thats over double cover price!!

Anyway, thanks to Bülent for providing accomadation and a personal sight seeing tour, and thanks once again to Dogu for the pick ups and drop offs, as well as just being very funny!
Posted by Matt Rowley at 9:47 PM

If you go to a club and they give you a cardboard box on the door.. beware! your supposed to put your clothes in it and go dance naked!